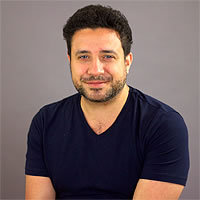 Luca Lampariello is from Rome, Italy. He holds a degree in Electronic Engineering and studied Interpretation in Paris. His true passion is languages: he is currently fluent in 10 and speaks 14. He has been working as a language coach for the last 10 years and has been coaching hundreds of students from a wide range of countries. Since 2008, his videos on YouTube and blog, LucaLampariello.com, have attracted thousands of followers and language learners all around the world. He is honored and thrilled to be this year's language ambassador at EXPOLINGUA!