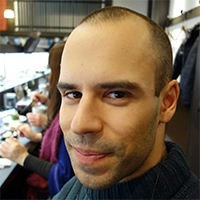 Pablo is determined to improve how we learn languages. The whole idea came to him while he was studying in Japan, as a combination of being frustrated with his research and watching too many TED talks, he realized that languages were something that he knew how to learn (having learned English, French and Japanese to fluency, adding later Thai), and many people were frustrated by traditional learning methods, so he thought that a better way of learning languages was something that he could contribute to the world. His experience had taught him that you can learn a language to proficiency by just doing things in the language, without any formal instruction at all. Because of that, he started researching alternative approaches that matched his experience, until he eventually found a method that really matched his experiences learning languages. He is now teaching Spanish through videos. He draws inspiration from Stephen Krashen’s Comprehensible Input theory and applies it to online video so that people all over the world can benefit from it. https://youtube.com/dreamingspanish https://www.dreamingspanish.com